Music @ Noon is back 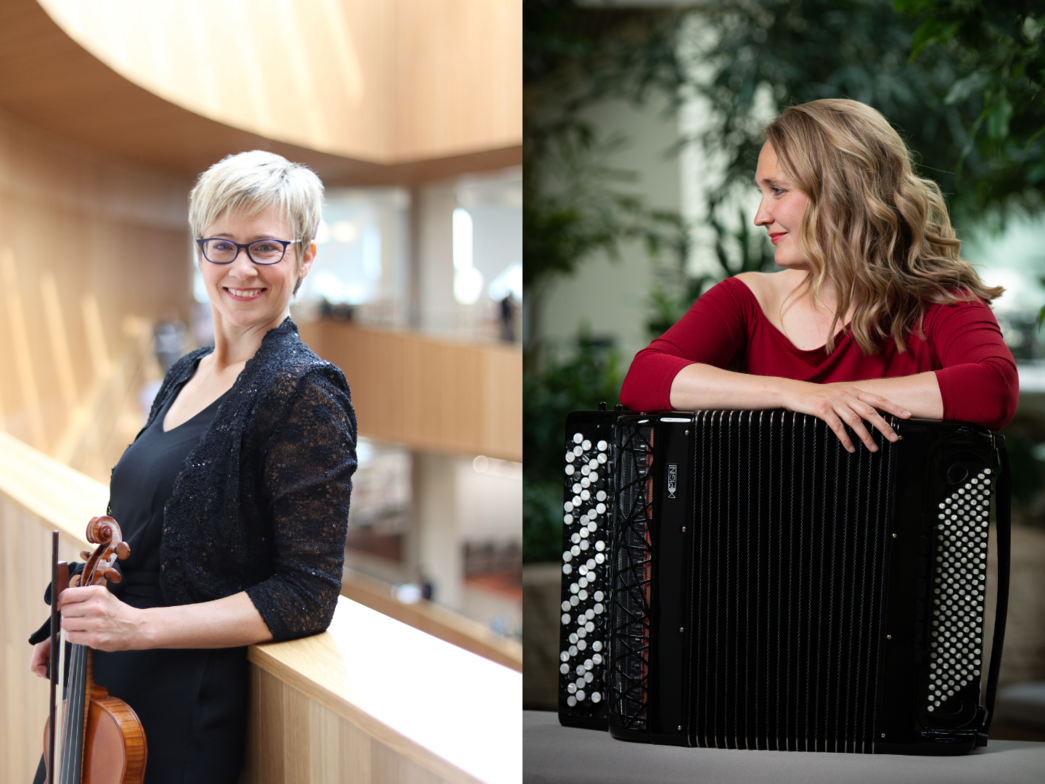 Come join us for the unique collaboration of Andrea and Penny.

Violinist Andrea Neumann‘s performances have been described as “a perfect study in poetic embodiment” and having “a commanding, flawless execution” (Calgary Herald). Andrea received her Bachelor of Music degree in Violin Performance from the University of Toronto and her Masters in Chamber Music Performance from the San Francisco Conservatory of Music. In 1999, Andrea had the pleasure of playing a recital on the legendary Heifetz Guarneri del Gesu violin at the Palace of the Legion of Honor in San Francisco. She toured with the San Francisco based New Century Chamber Orchestra and was also a member of the Santa Rosa Symphony.

Andrea was violinist and violist with Calgary’s award winning Land’s End Ensemble for five years. In 2012, she appeared as a soloist with the Calgary Philharmonic Orchestra in Vivaldi’s Four Seasons. Intensive study as Artist in Residence at The Banff Centre in 2013 culminated in a Canadian tour with renowned soprano, Stacie Dunlop. Their performances of György Kurtág’s Kafka Fragments, a work considered virtually unplayable, garnered critical acclaim.

Andrea enjoys teaching, performing, composing, and arranging. Her many projects encompass musical styles from the Baroque to present. She is a founder and Co-Artistic Director of String Theory Music Collective, an ensemble specializing in historically informed performance. Andrea plays a modern violin by Hungarian maker, Bence Holló and a Baroque violin by American maker, Warren Ellison.

Penny Sanborn is a Classical Concert Accordion performer and educator from Calgary, Alberta, Canada, whose musical performances and lessons transport you to a deeper experience. Penny performs solo, in chamber music ensembles and with orchestra. She also teaches accordion lessons to accordionists of varying skill levels to improve musical skill and growth.

She currently studies with distinguished Classical Concert Accordionist Sir N. Antonio Peruch, and has been awarded grants from professional organizations including the Canada Council for the Arts and the Alberta Foundation for the Arts. Her performance credits include the world-renowned Luciano Pavarotti, Itzhak Perlman, Renée Fleming, the Calgary Philharmonic Orchestra, and appearances in Canada, Dubai and Europe.

Admission is Free. Donations are gratefully accepted. All are welcome.

Regarding Covid protocols, we are following provincial guidance.  Advanced registration is no longer a requirement and masks are optional.

Bring a bag lunch and join a friend in Scott Hall after the concert.  Coffee, tea and dessert will be provided.

If you have further questions do not hesitate to contact us at music.at.noon@vapc.ca.

Subscribe to receive email updates with the latest news.